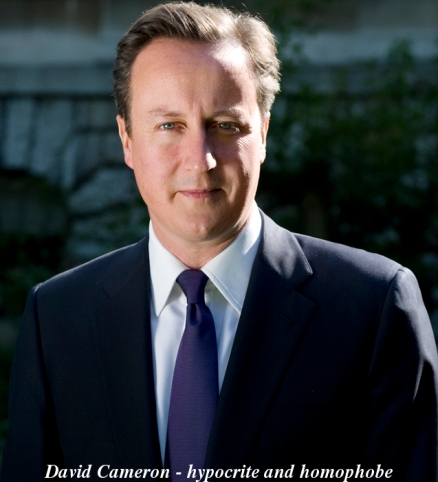 Every decent person, regardless of gender and/or sexuality, should be appalled, disgusted and angry about this one dears.  The UK Prime Minister, David “We’re all in this together – call me Dave” Cameron, has done a serious U-turn on financial aid to Nigeria.

In 2011 Mr Cameron stated that he would block aid to Nigeria if it pressed ahead with an anti-homosexuality Bill.  That Bill was duly passed through the Nigerian Parliament when signed by President Goodluck Jonathan on 13 January.  The Bill bans gay marriage, same-sex “amorous relationships” – whether sex is involved or not – and membership of gay rights groups and clubs.  Already hundreds of men have automatically become suspects and could face between five to fourteen years imprisonment – as well as the danger of being beaten to a pulp or even lynched by the corrupt Nigerian police and/or the public.  As I type there are reports coming through of dozens of men being rounded up by the police.  Meanwhile, an Islamic court is to try 11 Nigerian men for homosexuality, whom if found guilty could be stoned to death, whilst a twelfth man – a Christian – has been reported to be tried under the new secular law.

It has since been reported that the UK is to increase aid to Nigeria from £200 million last year to £270 million this year, in a complete reversal of David Cameron’s 2011 promise.  UK aid to Nigeria is spent on clean water, schooling and combating malaria, via UNICEF.  All very laudable one may think.  However, even the Secretary General of the United Nations, Ban Ki-moon, has voiced his disquiet about the new law, stating that it will fuel violence.

Of course, Cameron’s 2011 promise was long before Nigeria was identified as one of four nations posed to become a future financial giant, which may even one day have it’s own space programme.  I therefore do hope that the world is watching the actions of our odious and gutless Prime Minister, who would sell his own grandmother for profit, and who evidently thinks that “Ethics ith a county in the thouth-eath of England.”