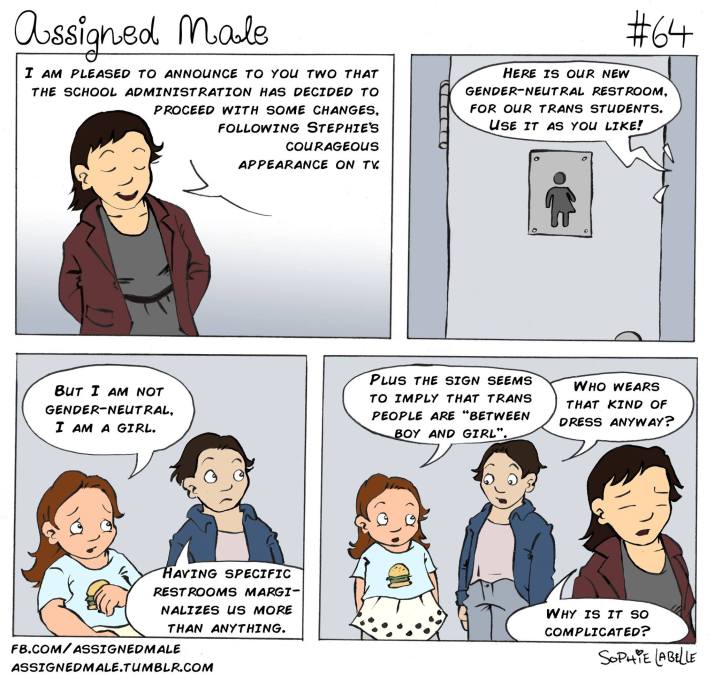 It is probably just as well I never entered politics, dears.  I hate to think just what sort of authoritarian junta I would be dictator of.

Having said that, a story from the USA just makes me plain angry.

At Hillsboro High School, Missouri, 200 students walked out of the state-owned school after one trans girl asked to use female bathrooms, instead of the gender-neutral ones she had previously used.

The story, which appears in Pink News, is somewhat convoluted, as it is claimed that she asked to use female changing facilities.

Lila Perry, 17, came out as transgender last year, and was apparently asked to use the gender-neutral changing rooms.  Having lived as a girl from the age of 13, she asked to be allowed to use the female bathrooms, which appears to have been allowed.

The result was a walk-out by students in protest, and Perry had to be locked in the Principal’s office for her own protection.  The protest appears to have been fuelled by parents claiming that she was receiving special treatment.

However, other students, of the school’s Gay / Straight Alliance, who supported Lila also walked out in counter-demonstration at the way she was being treated by fellow students.

For her part, Lila told reporters “It wasn’t too long ago white people were saying I don’t feel comfortable sharing a bathroom with a black person and history repeats itself.  I wasn’t hurting anyone and I didn’t want to feel segregated out.  I didn’t want to be in the gender neutral bathroom. I am a girl, I shouldn’t be pushed off to another bathroom.”

The students returned to class after two hours.

A written statement from Superintendent Aaron D Cornman stated that the school district “respects the rights of all students and appreciates the fact that the students we are educating are willing to stand on their belief system and to support their cause/beliefs through their expression of free speech.”

The statement went on to say the district accepts students “no matter race, nationality/ethnicity, gender or sexual orientation. We will promote tolerance and acceptance of all students that attend our district while not tolerating bullying/harassing behaviors of any type in any form.”

So, what are we to make of this?  Well, Lila Perry says she merely wanted to use the bathrooms (toilets this side of the pond) corresponding to her identified gender, as is the right of every cis person, and should equally be the right of every trans person.   And of course, this highlights the fact that a great many trans people don’t want to use gender-neutral facilities – because they’re not bloody gender-neutral.  Why is that so very hard for some people to understand?

Suddenly that’s been extended somehow to changing facilities.  I am not seeing any proof that Lila ever asked to share female locker rooms. And of course, we see that bigoted parents are behind the lot.

The school district says that they will not tolerate bullying or harassment of any form.  Then let them live up to their word.

If students choose to walk out of a state school in protest at a trans girl, then that’s fine.  It should be easy enough to lock doors when they walk out, identify them, and expel the lot of them.  To do any less is pandering to transphobic bullying.

And given the auld Scots saw “Fools and bairns speak at the cross whit they hear by the ingleside”, these transphobic students are learning their bigotry from their parents.  So, time for them to be investigated by the authorities for instilling hate in the minds of their children.

Honestly Loves, you really wouldn’t want me to be in politics.  I would make it so hard on bigots – of any kind – they would be scared to even fart too loud for fear of action being brought against them.