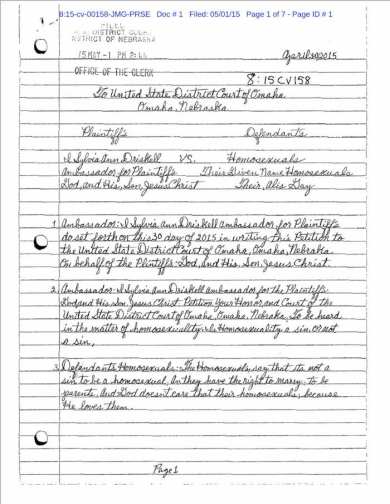 Nebraska woman’s bizarre case is thrown out of court

So outraged was 66-year-old Sylvia Driskell at LGBTQI people in the US media, that she brought a lawsuit against all homosexuals on Earth.

In some sort of bizarre reverse of the Billy Connolly movie The Man who Sued God, Driskell, of Omaha, Nebraska, filed a federal lawsuit against all homosexuals, naming herself as ‘ambassador’ for the plaintiffs, namely “God and His son, Jesus Christ”.

“Your Honor, I’ve heard the boasting of the Defendant: the Homosexuals on the world news; from the young, to the old; to the rich an famous, and to the not so rich an famous; How they were tired of hiding in the closet, and how glad they are to be coming out of the closet.”

“I, Sylvia Ann Driskell, Contend that homosexuality is a sin, and that they the homosexuals know it is a sin to live a life of homosexuality. Why else would they have been hiding in a closet?”

“I, Sylvia Ann Driskell, write, as well, we also know that if a child is raised in a home of liers [sic], and deceivers, and thieves that it is reasonable to believe that child will grow up to be one of the three, are all three.”

“I’m sixty six years old, an I never thought that I would see the day in which our Great Nation or Our Great State of Nebraska would become so compliant to the complicity of some peoples lewd behavior.

Why are judges passing laws, so sinners can break religious and moral laws?

Will all the judges of this Nation, judge God to be a lier [sic]?”

Oh dear.  Poor Sylvia.  Her comments would be tragic if they were not so hilarious.

Firstly, one would have thought that an omnipotent deity would have no need of any earthly “ambassador” and that if any such entity wished to punish homosexuals, then he would be perfectly capable of doing so of their own accord.  Instead, if God exists, then he seems to have absolutely no problem with having his creation born gay, lesbian, bi, genderqueer, intersex, pansexual, asexual, or in variations in some of these themes.

The closet references are extremely amusing.  “Why else would they have been hiding in a closet?” suggests that Ms Driskell actually think that non-outed LGBTQI people actually live in physical closets.  Oh if only, dears.  Where else would one find fabulous frocks to try on?

The statement concerning children is Facepalm City.  “I, Sylvia Ann Driskell, write, as well, we also know that if a child is raised in a home of liers [sic], and deceivers, and thieves that it is reasonable to believe that child will grow up to be one of the three, are all three.”  she writes, and of course the inference here is that if a child is brought up in a gay household, that child will also turn out to be gay.  Not only does science not bear this out, but how then does she explain exactly where LGBTQI children come from if not from cishet parents, including Christian parents?  Seems to me that Ms Driskell is of the Pat Robertson belief, that gays will die out because they can’t multiply.

Well, Judge John Gerrard, hearing the case in Nebraska’s US District Court, lost no time in throwing out Ms Driskell’s case.  He told first flatly told her that she had no legal jurisdiction to act as “ambassador” for God and Jesus Christ.  He then told Ms Driskell that it is not the business of US courts to decide whether homosexuality is sinful or not.

“The United States Federal Courts were created to resolve actual cases and controversies arising under the Constitution and the laws of the United States,” stated Judge Gerrard. “A federal court is not a forum for debate or discourse on theological matters.”

Some people have too much time and money on their hands.  Perhaps Sylvia Driskell should spend both of hers on improving her English spelling, in becoming educated on LGBTQI issues, in learning that a federal court in Omaha does not have the jurisdiction over the entire world (nor does the USA as a whole as she seems to think so), that the USA is a secular republic with a wall between church and state enshrined in the constitution, that an omnipotent God would not need a mortal being to do their bidding – and that if she wants to take the Bible literally, then as a woman she should be silent and subservient and by bringing her fatuous lawsuit, she has in fact blasphemed the very faith she claims to believe in.