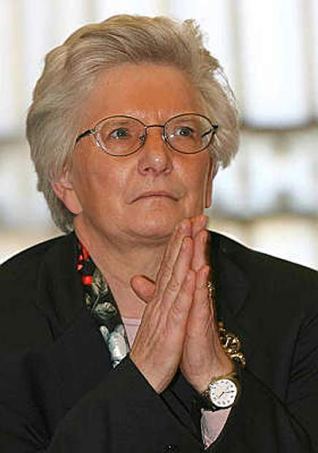 Paola Binetti – praying away the gay?

Make the strange lady go away Mummy, she’s scaring me!

Paola Binetti, Italian “Union of the Centre” Party member and member of the Italian parliament’s Chamber of Deputies, thinks she has come up with the answer concerning equal marriage in Italy – gays should just change gender.

“Why do we need to pass a law on civil unions for homosexual couples, and to engage in a lengthy semantic debate around what ‘marriage’ means today?’”  Binetti asked in an interview with Huffington Post Italy, “Why must we embark on a bitter parliamentary battle on the value of the family, to decide whether certain reforms will strengthen it or weaken it further?  It would be a complete waste of time: all debate has now been rendered void by the recent verdict of the Supreme Court in the case of the individual who has demanded the right to change sex without surgical intervention.”

Yes dears, you did read that correctly – she did suggest that gay people need only undergo gender reassignment to get married.  Hang on for a bumpy ride, this is a woman with degrees in surgery and psychiatry.

“Sexual difference appears completely irrelevant. It is enough for an individual to claim not that they are a certain way or they look a certain way but merely they desire to be a certain way,” Binetti continued, “Just present your documents, declare how you feel and how you want to be considered and the die is cast.”

To steal a line from the BBC comedy series Blackadder Goes Forth, “I do believe the phrase rhymes with ‘clucking bell’.”

When I first came across this story, which appeared in The New Civil Rights Movement, I thought it had to be satire or a spoof.  Surely no politician could be that stupid? So I went searching the internet.  Sad to say that it is 100% genuine.

Some people really don’t get it, do they dears?  Hello Paola, gay men like men, lesbians like women – they are not interested in the opposite sex, and have absolutely no desire to change gender.  If any of my gay friends saw some muscled Adonis, say in a kilt, I could be  wearing my sexiest outfit – and they would trample over me to get to him.

Oh well, I suppose no-one can every accuse her of transphobia.

Her comments follow the European Court of Human Rights condemning Italy for denying same-sex couples their human rights by not offering them marriages or civil unions.

72-year-old Binetti is a devout Roman Catholic and a Numery member of the ultra-conservative and controversial Roman Catholic organisation Opus Dei (Work of God), which Dan Brown mistakenly called a “secret sect” in his novel and subsequent movie The Da Vinci Code.  As a member, Binetti has voluntarily asserted that she does indeed wear a cilice; a toothed metal belt worn around one of her thighs, to constantly remind her of the suffering of Christ (let me see; crown of thorns, scourged, crucified, spear in the side – nope, nothing there about wearing a toothed belt – they didn’t even break his legs because he was already dead).

This is not the first time Paolo Binetti has made homophobic statements.  In 2007 she stated on Italian TV channel La7 that gays and lesbians needed medical care, maintaining that homosexuality is a disease.

As well as holding a senior position in the Italian government, since 1991 Paolo Binetti has been overseeing the work of the medical facility of the Biomedical Campus of Rome.

Be afraid, dears – be very afraid.