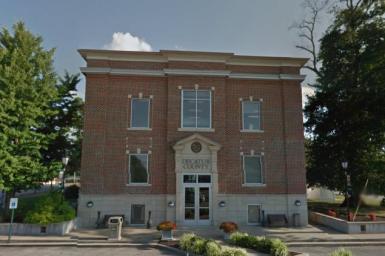 They’ve saved the state the trouble of firing them

In the wake of the US Supreme Court declaring that all 50 states in the USA must recognise same-sex marriage, the entire staff of Decatur County (Tennessee) Clerk’s Office have announced their resignations.

Clerk Gwen Pope and her employees Sharon Bell and Mickey Butler announced their resignations on religious grounds, with Ms Pope (oh the irony) first claiming that it wasn’t for publicity but then stating “It’s for the glory of God. He’s going to get all the glory.”

Well dears, I certainly am not going to shed any tears for Ms Pope, who has been Clerk since 2008, or her two underlings.  In fact, they have done Decatur County, the state of Tennessee and the USA a favour by jumping before they were pushed.

In most civilised, developed countries today, showing prejudice in your place of employment is frowned deeply upon, and in some countries it is against the law.  There are few nowadays who would show prejudice on the grounds of binary gender, race, ethnicity, creed, colour, physical / mental disability, social class, income, or many other criteria.  Sexuality and alternative gender should then be no different.

As one who has worked in customer services, I am disgusted that anyone should allow their prejudices to interfere with their work.  In any public-facing role, there are two rules; 1, you treat every customer not as equals, but you do not allow any personal feelings to make any distinctions between customers; 2, the most important customer is whosoever you serve.  In other words, you treat everyone with respect.  And anyone who allows prejudices, whether they be religious-based or not, is neither following the above rules, nor treating customers with respect.

Anyone who does neither is not fit to be in a public-facing role.

Asides from the above, given that this ruling took place in the USA, if the three are not willing to grant marriage licences on religious grounds, then they would be contravening the First Amendment of the US Constitution.  I don’t know if they think that the USA is a Christian country, and frankly I do not care whether they do or not.  The facts say different.  The US Constitution is the supreme law of the USA, which is by law a secular state with a wall between church and state.  Therefore, if this three allowed their faith to interfere with their state employment, then they are doubly unfit for the offices they held.  In fact, by contravening the First Amendment, they would in fact be committing a criminal offence.

I’ll go further, and publicly call the Clerk’s Office staff out as being hypocrites to their own Christian faith.  Ms Pope has been in her job for seven years.  It is probable she employed the other two.

They claim to be resigning over same-sex marriage on religious grounds, because it contravenes the Bible (as they interpret it).  Really?  Well, one wonders just how many divorcees they have married?  And what does the Bible have to say about that?  “Whosoever putteth away his wife, and marrieth another, committeth adultery: and whosoever marrieth her that is put away from her husband committeth adultery.“ (Luke 16:18, KJV).

And of course there is one thing we can be more than fairly sure of in this day and age, that the overwhelming vast majority of people getting married have had sex before marriage.  And the Bible is very clear about that; “I say therefore to the unmarried and widows, it is good for them if they abide (celibate) even as I.  But if they cannot contain (their lust), let them marry: for it is better to marry than to burn.” (1 Corinthians 7:8-9, KJV).

In the USA only a judge can grant divorce.  However the process begins by applying to the County Clerk’s Office to get the necessary paperwork or enquire where to get the said paperwork.  In doing so therefore the three must have abetted people in gaining divorces, only for the same people to marry others, despite the Bible being very clear on this matter; “And he saith unto them, Whosoever shall put away his wife, and marry another, committeth adultery against her.  And if a woman shall put away her husband, and be married to another, she committeth adultery.” (Mark 10:11-12, KJV)

It is worth noting here that the commandment against homosexuality which conservative Christians always fall back on comes from the Levirate Law of the Old Testament; “Thou shalt not lie with mankind, as with womankind: it is abomination.“ (Leviticus 18:22, KJV),  The verses I quote above however come from the New Testament, represent the New Covenant, which was allegedly God’s new message for mankind, and the verses from Luke and Mark allegedly being the words of Jesus Christ himself, the very man who Christians are supposed to worship and follow.

Neither can the Decatur County staff feign ignorance upon this, for Mark chapter 10 contains the very verses which opponents of same-sex marriage fall back on to claim that the Bible defines marriage as between one man and one woman; “But from the beginning of the creation God made them male and female.  For this cause shall a man leave his father and mother, and cleave to his wife;  And they twain shall be one flesh: so then they are no more twain, but one flesh.” (Mark 10:6-8, KJV)

We therefore see that the resignations are not “for the glory of God”, but just plain old-fashioned homophobia dressed up as religion, from three bigots who were unfit to hold their posts in the first place, unfit to hold any US governmental posts, and who actually do their faith a disservice than any honour through their blatant hypocrisy.

They have therefore done Decatur County a huge favour by resigning; they have saved Mayor Mike Creasy the trouble of firing them for contravening their terms of employment, and possibly committing criminal acts.

Decatur County Commissioner David Boroughs stated “That’s a personal individual decision, but I strongly support them if their faith is that strong,  I’m proud of them that their faith is so strong and well-rounded that they feel they can do that.”

Well, I for one do not share Commissioner Boroughs sentiments.  Rather I say good riddance.  I hope that the homophobic hate the three are displaying does not go unnoticed by future prospective employers and that they have difficulty finding any future employment in public facing roles.

If that sounds harsh, cold, spiteful, or bitchy, I make no apologies for that dears.  I am more concerned about the people who may have to deal with them than three self-righteous bigots who may let their personal prejudice and their faith interfere with the public they deal with.  Neither do I care that they have lost their livelihoods, which was their own doing.  They took that choice when they decided to put their faith above their employment.  They’ve made their beds, now let them lie in them.

It would not look good on a curriculum vitae (what you lovely people across the pond call a resumé)  for public roles here in the UK.  One can only hope the same applies in the USA.